“Waiting for death” that is what Sjef Copray laughing loudly says when asked what he will do after retirement. For those who do not know Sjef: he loves sarcastic and provocative comments (for example, he likes to use them in the laudation for his PhD’s) and sees it as his calling to write them down once.

Sjef Copray (1952) says he is still a purebred Amsterdammer even though he lives already for decades in Groningen; He is married to Els and father of sons Joost and Thijs. 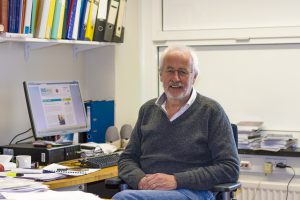 In high school, he became by the great stories of his biology teacher Mr. Reijnders and Mrs. Fold fascinated in evolution and particularly interested in human biology. In his free time he enjoyed the pleasures of Amsterdam, culture (cabaret, film), (life) music (Paradiso) and sports (basketball and football, Ajax / Cruyff), he also embarked on a study of Human Biology at the Vrije Universiteit. At a time when smoking still was considered as Healthy Aging he managed to steal the heart of Els in a pub behind the Leidseplein with the opening line “Can I beg a cigarette from you.” Now love was sealed (in an age that sex was free and weed was distributed freely) he could finish his studies undisturbed. His motivation to become a scientist grew during his doctoral internships in Cell Biology and Genetics at the Vrije Universiteit where he witnessed the rise and development of all current molecular biological techniques.

Logical next step was to graduate, which was not easy in the financial crisis of the early eighties. However, he began motivated at the Faculty of Dentistry of the University of Groningen with a PhD in the field of craniofacial growth, specifically to the regulation of the growth of the mandibular condylar cartilage. With pleasure he completed his doctoral period in 1984, although the distance to Amsterdam sometimes has been perceived as a problem.

That distance and time are relative he learned during his postdoctoral period in Seattle in 1986-1987. His sons, living in beautiful Seattle with its culture and unspoiled nature all around and being part of American culture made it in his own words the best time of his life. With the American motto Go big or go home, he worked hard in the lab of the University of Washington to study the effects of mechanical forces on protein expression in condylar cartilage and with success.
Despite offers to come and work in Ann Arbor and Dallas and after a tenure in Seattle had just passed his nose, the young family decided to return to where it all began scientifically: Groningen.

However, the situation there was a little different than when he left. The Faculty of Dentistry was closed and the field craniofacial growth had virtually disappeared in the Netherlands.

Because the brain had always been fascinated him, Sjef accepted the offer to start at neuroscience, initially targeting fundamental research on proprioception (inter alia, role of neurotrophic factors into muscle spindle development). First under Jan Douwe van Willigen and later under Daniel Kernell and his successor Erik Boddeke.

How did you end up in stem cell research? “With my experience in neural cell culture, I was approached by neurosurgery to cooperate on research into a possible treatment of Parkinson’s disease with the implantation of cultured dopaminergic neurons. In the beginning we used human fetuses derived from abortion as a source, but because it was particularly difficult to get fetal dopaminergic neurons in sufficient quantities and all in the same development stage, clinical application (also because of ethical concerns) was considered not feasible anymore. We have done research into the possibility of xenotransplantation with dopaminergic neurons derived from pig fetuses for a short period, but the risk of transmission of viruses from animals to humans eventually proved clinically not acceptable. Only then stem cells came into the picture as a source of implantable neurons, first embryonic stem cells and later the neural stem cells.

By choosing to focus on Multiple Sclerosis (MS) research in the department, Sjef also started to investigate the possibility to effect remyelination in MS patients by implantation of oligodendrocyte precursor cells derived from neural stem cells. “The experiments with mice implants in MS animal models were very successful. For the step for possible clinical application an autologous human stem cell source was necessary, but the use of endoscopic collected autologous adult neural stem cells from the ventricular wall in the brains of patients turned out to be a dead end “.

And then you stopped with research? “Hahaha no, just at that time Prof. Dr. Yamanaka had developed the iPSC(induced Pluripotent Stem Cell) technology  and we started with that. After several years of research and optimization we are therefore able to make various types of brain cells (oligodendrocytes, dopaminergic neurons) via iPS cells from skin cells of healthy individuals or patients. “

May we find iPSC technology already in the clinic soon? “Well trials using iPS derived insulin-producing cells start soon, so that looks hopeful; Prof. Yamanaka in Japan is about to begin with the transplantation of via iPS cells obtained autologous dopaminergic neurons in Parkinson’s patients. Results from a clinical trial in Japan, where they try to cure macular degeneration with the help of the IPS technique look promising. It is difficult to estimate when our iPS Capplication for MS patients will find a way to the clinic. “

“Where we first thought that we, in order to prevent rejection in transplantation, had to make only patient derived iPS cells, it may now seem to be sufficient to create iPS cell banks with iPS cell lines with all possible combinations of” rejection genes “that cover the population. For a relatively isolated country like Japan approximately 90 iPS cell lines already would be plenty enough, but you can imagine that with its multicultural society for America or the Netherlands there must be many more. “

And research? “The iPSC technology has created a truly unique” tool in that aspect, for the first time disease processes caused by the effects of gene mutations in patient-specific cells can be examined in detail. Coupling to the spectacular CRISPR / CAS9 technology provides unprecedented opportunities to introduce mutations (for research) or correcting patient’s own IPS cells (for treatment). For MS, it could be very interesting. With the help of the iPS cells of different type of MS patients, and the resulting differentiated brain cells, we can for the first time examine whether there may be intrinsic differences in the functionality or the stress sensitivity of brain cells (e.g., oligodendrocytes, neurons, microglia?) of MS patients compared to healthy controls. It can be an important research focus for the MS Center North Netherlands (1 of 3 MS centers in the Netherlands)”

You have worked for more than 30 years with passion in research. Are not you afraid you will fall into a black hole after you retire? “That will be fine I guess. The essence is that I chose myself to go in (early) retirement now to enjoy my freedom. If you work and especially if as a researcher you’ve always busy. The excessive emphasis on publication lists, it seems that ambition and competition have a higher priority than what research is all about: pure curiosity and desire to understand and solve major medical problems. Isn’t research about original ideas and perspectives, and not status and prestige? But maybe I’m naive and apolitical therein.

Retirement is a time to look back and when you wonder whether you’ve made the right choices in life (wouldn’t I rather pursued the cultural creative side or studied for example history?)

Later I have time to read undisturbed piles of books, to write, to paint, to enjoy music (and to make myself), to sport, to travel around by bicycle, or just do nothing hopefully in an endless health. My nightmare is that of my father who has never been able to, because he died five months after his retirement. You know, the first 30 years of your life have a reasonably carefree time, then you work 30 years hard and you are almost consumed by the stress and always have far too little time for your loved ones. The last 30 years I want to live again as in the first 30 years, without stress, happy enjoying everything in an uninhibited way.

Although I have traveled a lot and make it no longer my main priority there is enough to travel. For example, I would still like to go to Jerusalem or St. Petersburg. I have read so many books and I would like to write a book myself. A (good) book reading / writing is like making a fascinating journey. “

The iPSC technology established by Sjef in the UMCG will be further developed and offered by the CRISPR/CAS/iPSC facility of the European Institute for the Biology of Aging (ERIBA) and will be available to researchers from the University Medical Center Groningen and third parties. For more information go to CRISPR/CAS/iPSC Facility ERIBA