Heat shock 70 kDa proteins (HSP70s) are ubiquitous molecular chaperones that function in a myriad of biological processes. This multitude of roles is not easily reconciled with high sequence identity of Hsp70s within and across species (Figure 1A) and the universality of the activity of HSP70s in ATP-dependent client protein-binding and release cycles and wherein client protein recognition is typically rather promiscuous.

Yet, functional differences have been observed for some of the 7 cytosolic HSP70 members that are studies in my group. In addition, the apparent conundrum of multi-functionality and client binding promiscuity is likely resolved by the fact that HSP70s do not work alone, but rather as ‘HSP70 machines’, collaborating with and being regulated by several cofactors. A ‘minimal Hsp70 machine’ is made up by at least one chaperone DNAJ, one HSP70 and one Nucleotide Exchange Factor (NEF) (Figure 2B). The canonical model for the functionality of these machines has two key features: 1) the initial binding of an unfolded client protein occurs by a J protein that ‘delivers’ it to HSP70, in addition to (with the bound client) stimulating HSP70’s ATPase activity; 2) the dissociation of the client is caused by NEF actions, which gives the client either the opportunity to fold into its active conformation or, if folding is not yet complete, allow clients to re-enter the cycle such that by reiterative cycles of client binding and release productive folding can occur, whilst at the same time aggregation is prevented during the time the client is bound.

So, in this simplest view the many different DNAJs may define client specificity. At the same time the different NEFs may, besides the biochemical state of the client itself, determine the fate of the client. Figure 2C schematically summarises our current hypothesis which is being tested in diverse projects in the lab. 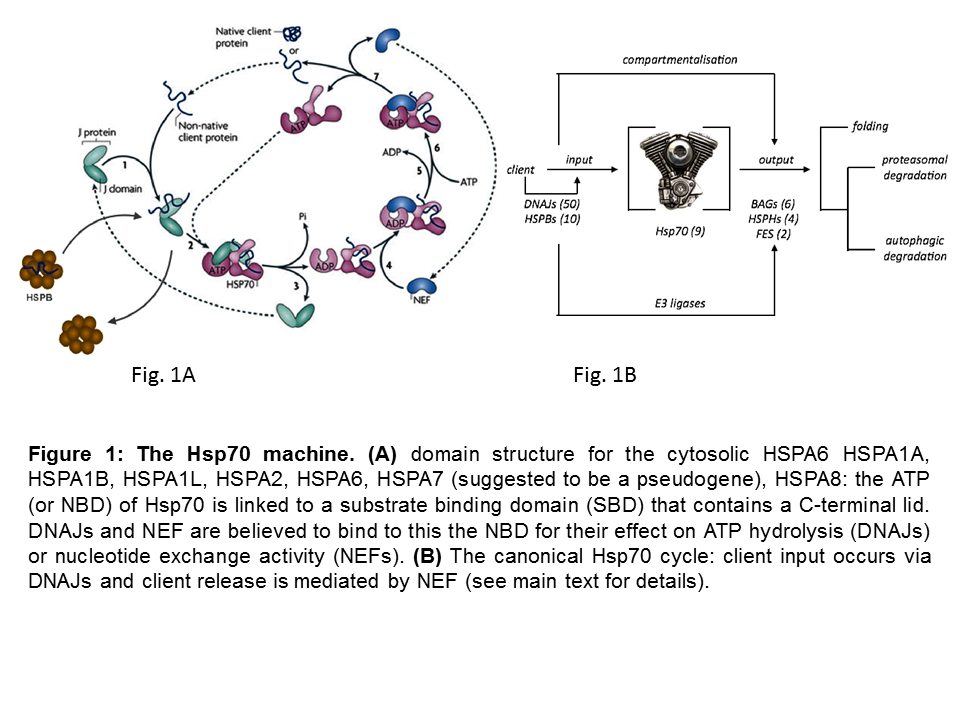