On 8 February 2017 Leonie Bais defended her thesis Exciting links: imaging and modulation of neural networks underlying key symptoms of schizophrenia in front of a committee of established researchers and was awarded with the doctor’s title. 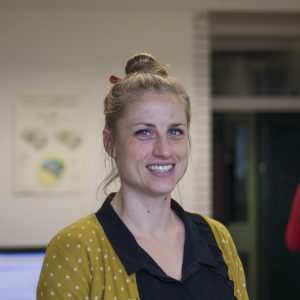 This thesis has been written from the conceptual framework of cognitive neuropsychiatry, a scientific approach to explain psychiatric symptomatology with models on cognitive and neural mechanisms (Halligan & David, 2001).

The studies described in the previous chapters are meant to contribute to the unravelling of some complexities of schizophrenia.
We focused on two key components of schizophrenia: auditory verbal hallucinations and negative symptoms. There is an urge for more efficient treatment strategies for people with schizophrenia and related mental problems. To that end, a better understanding of the underlying neural and cognitive mechanisms of these key symptoms is essential.
Developments in neuroscience lead to the understanding that schizophrenia is not the result of dysfunctioning isolated brain regions, but rather of disrupted brain circuitry(Andreasen et al., 1996; Friston, 1998). We therefore took a network approach as the basis for this thesis. The first part of this thesis focused on brain networks underlying auditory verbal processing in patients with schizophrenia. In the second part, the possibilities of the non-invasive brain stimulation technique rTMS to favorably influence neural networks, and
thereby reduce key symptoms, have been described.