On 6 September 2016 Ilia Vaichtein defended his thesis Raiders of the CNS, New Insights on microglia and myeloid infiltrates in EAE for a committee of national and international researchers and was awarded with the doctor’s title. 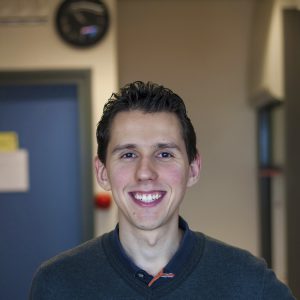 Multiple sclerosis (MS) is a complex disorder of the central nervous system (CNS) characterized by demyelination, the loss of myelin (white matter). Myelin is a fatty layer that, that lies as insulation around the extensions of nerve cells and is important for conduction of electrical pulses. During MS myelin disappears in some places in the CNS, causing the electrical impulses to slowdown, or not reach their goal. This leads to a chronic condition with characteristics such as movement disorders, chronic pain, bladder problems with eventually complete paralysis of the muscle groups. Although the exact cause of demyelination is unknown, it is well established that the immune system is involved.

Various immune cells migrate from the periphery, all body fluids and organs outside the CNS, into the CNS and there break down myelin and take it up, also known as phagocytosis. Under normal circumstances, these immune cells can not enter the CNS, since there is a blood-brain barrier (BBB) which prevents this, but during MS the BBB exhibits serious leakage.
Moreover, it is still unclear whether the infiltrating immune cells initiate the degradation, or that there is an intrinsic defect in the myelin, and that immune cells react to this.

Ilia has investigated how the initial stage of MS takes place through the use of the experimental auto-immune encephalomyelitis (EAE) mouse model.
He continues his work as a postdoc in the lab of Anna Molofsky in the Department of Psychiatry, UCSF Weill Institute of Neurosciences, San Francisco, USA.